I mingle with my peers or no one, and since I have no peers, I mingle with no one. — John Kennedy Toole, A Confederacy of Dunces

Today was essentially Eating Day, with meals at two of the Brennan family’s famous restaurants, sandwiched with a bit of wandering around on my own. I like both eating and being on my own, so this was a good day.

This was also the day before I left for the wedding site, so encroaching nerves meant that said meals were a bit heavy on the booze.

I started the day where days in New Orleans are meant to be started:

Breakfast at Brennan’s is one of those things that’s all touristy, but it doesn’t matter, because it’s that darn good. Top notch service, top notch food and booze at breakfast. Can’t beat that.

I won’t go too much into my three-course, three-cocktail breakfast (though you should check out my dining report), but let’s just say I was feeling pretty good when I rolled back out into the Louisiana heat.

I am not a frilly girl by nature, but I had a wedding to attend, and I needed to spruce up my nails. I don’t know how I ended up choosing Salon D Nola (or, specifically, the nail side of the business, Salon D Nola Too) on Burgundy Street, but it was an awesome choice.

My nail artist even talked me into leaning away from my plain, boring beige nails, with what she called a “party nail”: one coordinating, sparkly nail on each hand. 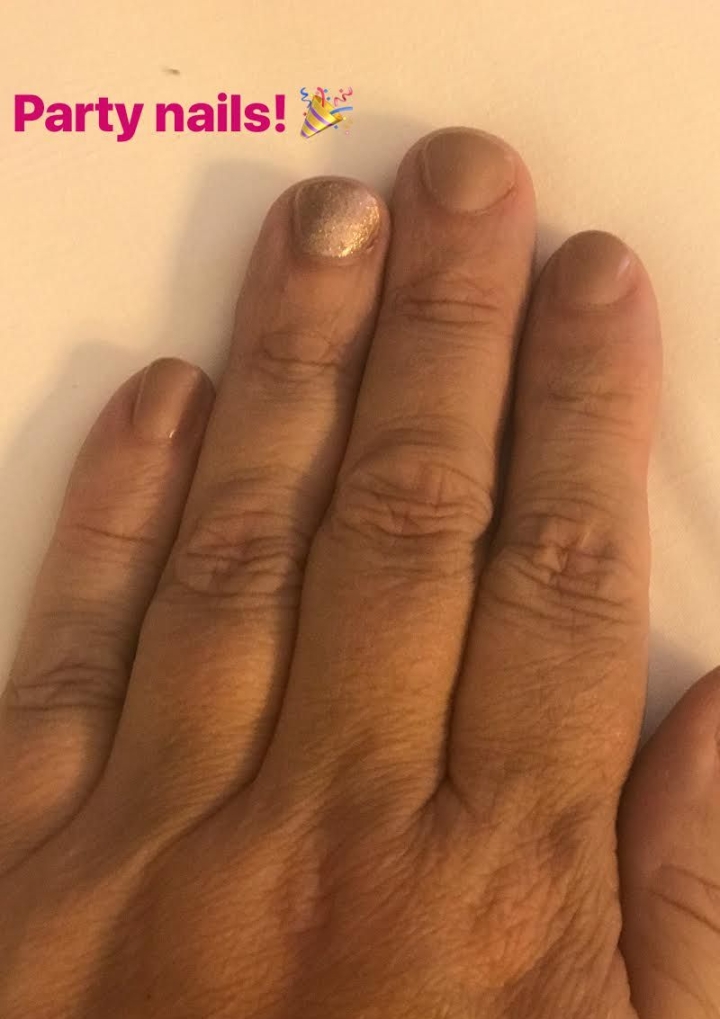 That’s about as fancy as I get, folks.

Afterwards, I  headed back to the room because it was hella hot. I spent as much time as I could on the balcony (interspersed with cool downs in the air conditioning), immersing myself in New Orleans culture.

Eventually, it was time to get ready for dinner. I left a bit early to do some shopping on Royal, mostly for the pralines I have to carry home with me from each trip. I also found myself in one of dozens of shops full of hot sauce and Louisiana souvenirs, and found this little guy:

He’s a voodoo doll! Isn’t he the cutest?! Somehow I let B talk me out of him, and I still regret it…

It was finally time for dinner at Mr. B’s Bistro. I got there right at opening, but had to wait at the bar forever … where I entertained myself with their Orange Julius (no relation to your local mall).

I am not even a huge seafood fan, but these Bacon-Wrapped Shrimp with Grits and Red Eye Gravy is the stuff of dreams.

I even found a recipe, and may attempt it myself. Or I will just go back…

After dinner and a bit more shopping, I landed back on the balcony in time to watch a Second Line go right underneath.

Read about Day One.